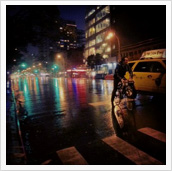 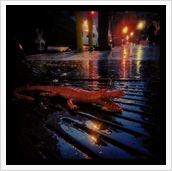 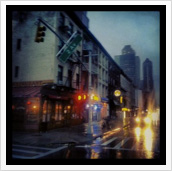 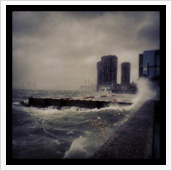 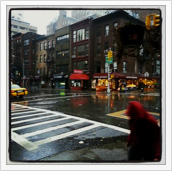 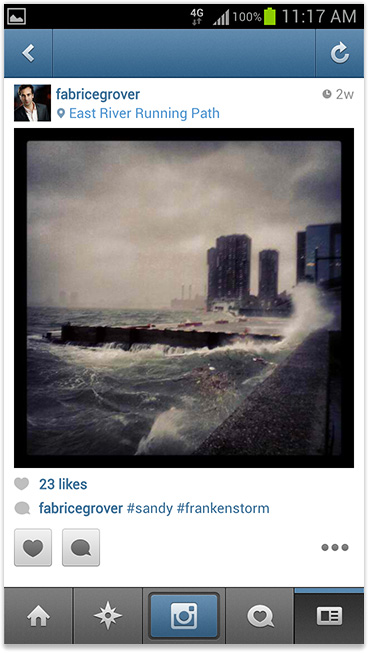 The afternoon Hurricane Sandy approached New York, some friends called me up and asked if I wanted to go out and take photos with them. As we walked through East Village, we uploaded our cell phone photos to Instagram, adding the #sandy hashtag and sharing the pictures on Facebook and Foursquare.

That night, Instagram received #sandy photos at a staggering rate of 10 images per second. Over the next few days, some 800 000 photos were uploaded to the service.  Instagram CEO Kevin Systrom said hurricane Sandy was probably the company’s biggest moment.

STRANGERS IN THE NIGHT

As the storm approached, one of the things that surprised me was seeing strangers’ photos taken nearby appear in real-time on my cell phone’s Instagram stream. Instagram reads the location metadata embedded in people’s cell phone photos and matches this information with users’ cell phone GPS coordinates to determine which photos show up in the app stream.

People whose photos we were seeing in our stream could see and “like” our photos too, and we could click through to see galleries of each other’s recent images, commenting on them if we wanted.  These interactions made me feel connected to the people around me in a way I hadn’t anticipated when I set out for the walk with my friends.

For me and the thousands of New Yorker’s who uploaded their #sandy images to Instagram, this was a meaningful way to share the experience of the storm.  It was also an illustration of one of the reasons Facebook bought Instagram.  In the pre-Instagram Facebook image-sharing model, photos are “liked” by people to whom we are already connected: Friends, or friends of friends.  Instagram shows us photos taken not only by those we already “follow,” but also by people entirely outside our existing circles of acquaintances.  Instagram takes advantage of its cell phone operating environment to show us images that are deemed relevant based on geolocation, time, and hashtag information, introducing us to photos taken by people we may have never met, but who are connected to us in other ways.

When I got home the night of the storm, before Sandy knocked out the East Village’s power, internet, and cell reception, I logged into Facebook on my laptop and replied to my friends’ comments.  I marvelled at the speed with which fake photos were making the rounds.  When an image has been liked over 100 000 times, there’s always the possibility it’s a photoshop composite. But many of my friends couldn’t resist and shared these photos anyways.