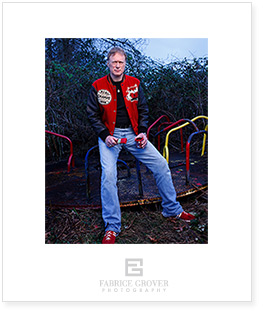 In 1978, the hit band Trooper released Thick As Thieves, a double-platinum selling album produced by Randy Bachman of The Guess Who fame.  Frank Ludwig, Trooper’s keyboardist, played and sang in Raise a Little Hell, a big hit in Canada and the States. His song Round, Round We Go made the top 10 that year.

Fast forward 32 years.  Frank Ludwig is getting ready to release his new album called It’s About Time.  He needs a new photo.

We come up with this concept:  sitting on a rusty old roundabout he discovered next to a church and debrambled himself, Frank holds a wet brush and a half empty can of paint.  Obviously the roundabout can’t be restored, but Frank is painting it just the same… because he feels like it.

Marty Wilson - Mr Ludwig.Round round was my favorite trooper hit.I was a fan of yours then.Well the years passed and a song kept playing over and again in my head and just this year after 25 years of searching off and on I stumble onto it and to my surprise you were the singer.That was amazing to me.”Whats your hurry Darlin” By Ironhorse might be the most under rated song ever in my opinion.God bless.